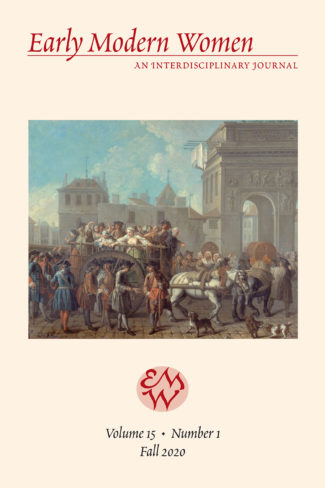 Early Modern Women: An Interdisciplinary Journal (EMWJ) is the only journal devoted solely to the interdisciplinary and global study of women and gender spanning the late medieval through early modern periods. Each volume gathers essays on early modern women from every country and region by scholars from a wide range of academic disciplines including art history, cultural studies, music, history, languages and literatures, political science, religion, theatre, history of science, and history of philosophy.

EMWJ was founded in 2006 at the Center for Renaissance and Baroque Studies of the University of Maryland by Jane Donawerth, Adele Seeff, and Diane Wolfthal (Rice University). Beginning with volume 2, EMWJ was co-published with ACMRS, and on 30 June 2011 when the Center at Maryland was closed, ownership of the journal was transferred entirely to ACMRS. At the same time, Professors Anne J. Cruz, Mary Lindemann, and Mihoko Suzuki at the University of Miami were appointed the new editors of EMWJ (beginning with volume 7), and the journal was co-published with the University of Miami College of Arts and Sciences Center for the Humanities until the end of 2017. Beginning 1 January 2018, the journal is published solely by ACMRS and is edited by Bernadette Andrea (University of California, Santa Barbara), Julie D. Campbell (Eastern Illinois University), and Allyson M. Poska (University of Mary Washington).

EMWJ has been remarkably successful. Because of the insight and foresight of its founding editors, who crafted an unusual if not unique venue for research in the field, and the tradition of excellence upheld by its subsequent editors, it has received two awards from the Council of Editors of Learned Journals (CELJ) of the Modern Languages Association. In 2009, it received Honorable Mention for “Best New Journal,” and in 2013, it received the “Voyager Award” for best journal covering the period 1500 to 1800. Beginning with volume 9, EMWJ has been issued twice a year to accommodate the large number of submissions it receives.

The founding editors at the University of Maryland have established an award for the best article in each full volume (now two issues per volume) that carries a prize of $1000.

ACMRS acknowledges support for the journal from Society for the Study of Early Modern Women and Gender and the Sixteenth Century Studies Society and Conference.

Click here to see the contents of current volume.

Advisory Board members agree to review essays in their specialties and/or recommend reviewers for submissions.

All submissions should be submitted through Scholastica.

Please include a 150-word abstract of your article. All essay manuscripts must be double-spaced (including documentation). Typically, article submissions range between 8,000 and 10,000 words including notes. Documentation should appear as footnotes without bibliography upon first submission, and MUST follow Chicago Manual of Style, 17th edition, chapter 14 "Notes and Bibliography." Please read the brief guide to the appropriate notation style for EMWJ manuscript submissions. Since the review process is blind, please make sure that your name does not appear anywhere in the text of your article. Should you need to cite your own work, please refer to yourself in the third person. All manuscripts are subject to editorial modification.

Editorial inquiries should be directed to [email protected].

Those with books and multimedia for review should contact the Book Review Editor at [email protected] for the submission process and address where the book should be mailed. Please include "Book Review" in the subject line.

Thank you for agreeing to be a submission reviewer for Early Modern Women: An Interdisciplinary Journal. For reviewing guidelines, please refer to the “Guidelines for Reviewing Article Submissions” (click to open). If you have any questions about the review process, please contact the journal editors at [email protected].

Reviewers of Books and Multimedia

If you are reviewing a book or multimedia project, please refer to the “Guidelines for Book and Multimedia Reviews” (click to open).

Publishers of Books and Multimedia for Review

Those with books and multimedia for review should contact the Book Review Editor at [email protected] for the submission process and address where the book should be mailed. Please include "Book Review" in the subject line.

Annual subscriptions are available for for individuals and institutions, with a discounted rate for students.
A subscription includes both the Fall (#.1) and Spring (#.2) volumes.

Early Modern Women: An Interdisciplinary Journal, was awarded Honorable Mention by the Council of Editors of Learned Journals for its 2009 “Best New Journal Award."

Early Modern Women: An Interdisciplinary Journal, was awarded by the Council of Editors of Learned Journals the 2013 Voyager Award, which "recognize[s] excellence in any journal covering the period between 1500 and 1800."

"EMW is an ambitious, and now accomplished, newcomer of about seven years. For the relatively short time it has been published, it is generously extensive, with 300 and more pages per issue. Treating the subject of women in this period, in an inviting, multiple-disciplinary approach, EMW engages critically and intelligently with the categories that it addresses—both “Early Modern” and “Women” —presenting a wealth of fascinating research and pushing readers to complicate their understanding of the fields. The journal also gives a powerful sense of scholarship as a communal endeavour, and research as part of larger conversations. The “Forum” section of each volume is very effective in organizing a multifaceted conversation of a timely topic, and the shorter essays in this section are very accessible to non-specialists. On top of all this, the journal is beautifully produced: the font is elegant and a pleasure to read; the images are multiple, large, and crisp; and the recent transition from endnotes to footnotes is greatly appreciated."

Click here to read a full review from the October 31, 2014 issue of the Times Literary Supplement.

Alexis Butzner's "'Taken Weak in My Outward Man': The Paradox of the Pathologized Female Prophet" (EMWJ volume 13.1) was awarded the best article prize for 2018–2019 by the Society for the Study of Early Modern Women and Gender.

Editorial queries should be directed to [email protected].